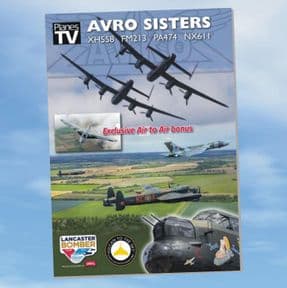 Produced in association Planes TV, this release covers the exciting 2014 display season and focuses on the Avro Lancasters and Avro Vulcan meetings that gave the aviation community a once-in-a-lifetime opportunity to see these classic Avro 'sisters' together.

The historic UK tour by the Canadian Lancaster features in this long and nostalgic look at the 2014 Vulcan and Lancaster displays.

We recorded "Vera's" arrival, departure and several shows where she was accompanied by PA474, the Battle of Britain memorial Flight Lancaster. Also the emotional flybys with PA474 at East Kirkby over the taxying "Just Jane" and the poignant flight with the Vulcan on the occasion of the Turf Cutting ceremony for the new Bomber Command Memorial.

Vulcan's own appearances at several shows are also covered with some remarkable air to air footage especially staged for Planes TV cameras.