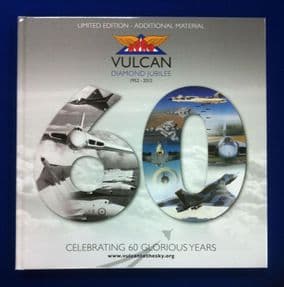 This Second Edition of the extremely popular 60th Anniversary Book includes additional material in the form of rare photographs of Vulcan aircraft taken including some at the early development stages.

With a foreword by Eric Verdon-Roe, the Grandson of the founder, the book starts with a brief history of the man and his company, with focus on the individuals that made it one of the leading aircraft manufacturers of the 20th Century.

Filled with some rare historic photographs from the design stages of the baby 707’s to the production aircraft, the book also features a section dedicated to every single Vulcan aircraft ever made.

Other sections recount stories from the crews who flew them with anecdotes from all around the world, wherever Vulcan aircraft visited. The book also details the first and the last made, with extensive sections on VX770 and the sole remaining airworthy example - Vulcan XH558.