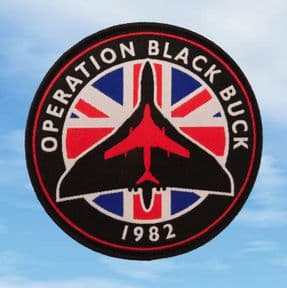 Detailed woven patch, showing planforms of the Vulcan and Victor aircraft with the background of the Union flag.

Operation Black Buck was series of 7 missions by the RAF during the Falklands conflict in 1982.

The raids were staged from RAF Ascension Island, close to the equator. The return journey was almost 13,000 km and 16 hours, making the Black Buck missions the longest-ranged bombing raids in history at that time.

The Vulcan lacked the range to fly to the Falklands without refuelling several times, as it had been designed for medium-range missions. The converted Victor tankers had a similar range, so they too had to be refuelled in the air. A total of eleven tankers were required for two Vulcans, with each Vulcan being refuelled seven times on the outward journey and once on the return journey.

100mm (4") diameter, designed to be sewn to existing clothing.