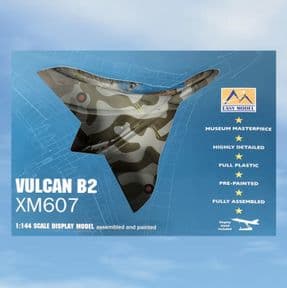 Bachmann have worked together with Easy Model to produce an Exclusive 1:144 scale display model of this iconic aircraft.

This particular model is based on Vulcan B2 XM607, which played a vital role during the Falklands War, successfully completing the Black Buck One mission. The Black Buck Missions were the RAF's most daring raids since Operation Chastise - the Dambusters raid in World War Two.

XM607 was piloted by Flight Lieutenant Martin Withers. Martin was awarded the Distinguished Flying Cross for his part in the action and he went on to be Chief Pilot of Vulcan XH558 and was at the controls for her final flight in 2015.