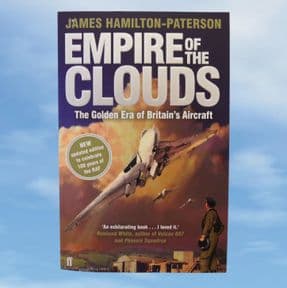 Empire of the Clouds

Empire of the Clouds
The Golden Era of Britain's Aircraft
Author: James Hamilton-Paterson

In 1945 Britain was the world's leading pioneer and builder of jet aircraft. Design geniuses dreamt up and built astonishing new planes. And what aircraft they were. The sleek Comet, the first jet airliner. The awesome delta-winged Vulcan, an intercontinental bomber that could be thrown about the sky like a fighter. The Hawker Hunter, the beautiful fighter-jet and the Lightning, which could zoom ten miles above the clouds in a couple of minutes.

Sadly by the late 1960s, the designers, the pilots and the legendary companies they worked for were gone. What was it like to be alive in that marvellous post-war moment when innovative new British aircraft made their debut, and pilots were the rock stars of the age?

Author: James Hamilton-Paterson is the author of the bestselling Empire of the Clouds, which was hailed as a classic account of the golden age of British aviation. He won a Whitbread Prize for his first novel, Gerontius, and among his many other celebrated books are Seven-Tenths, one of the finest books written in recent times about the oceans, the satirical trilogy that began with Cooking with Fernet Branca, and the autobiographical Playing With Water. Born and educated in England, he has lived in the Philippines and Italy and now makes his home in Austria.