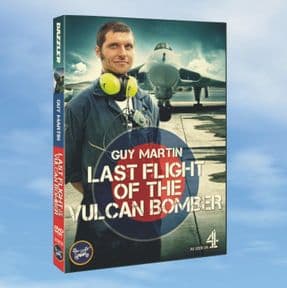 With unprecedented access, Guy joins the Vulcan to the Sky Trust engineers tasked with preparing a 600mph Vulcan Bomber for what was virtually its final flight. With footage of XH558 and behind the scenes at Hangar 3, Doncaster and supplemental footage from XM655.

Guy learns about the incredible history and mechanics of this legendary machine and of course has a test drive himself, before witnessing the final sortie of arguably the most iconic bombers in British aviation history.

This is the story of the Vulcan Bomber, featuring contributions from Vulcan pilots and crew who were faced with the responsibility of dropping nuclear bombs.

Also available in Blu-ray: Select the Blu-ray version from the drop-down menu above.