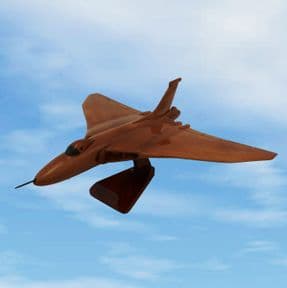 Handcrafted from quality mahogany with a high luster varnish, this stylised model of an Avro Vulcan is perfect for a display on a desk, in your home or in a display cabinet.

The Avro Vulcan is a 4-engine jet-powered tailless delta wing bomber. The aircraft type was operated by the Royal Air Force. Of the three V bombers produced, the Vulcan was considered the most technically advanced.

As a part of the V-Force, the Vulcan was the backbone of the United Kingdom's airborne nuclear deterrent during much of the Cold War. However, the Vulcan’s only combat missions took place towards the end their service. These were conventional bombing missions completed in Operation Black Buck during the Falklands War in 1982.

Ethically Sourced: The wood used is grown and felled under licence, with a constant felling and replanting system to maintain sustainability.