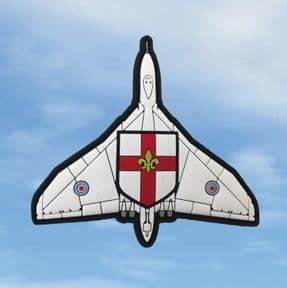 On 25 April 1959, RAF Waddington was granted the Freedom of the City of Lincoln. Since then all Waddington aircraft have carried the City Crest.

Vulcan XH558 was delivered to Waddington on 1 July 1960 becoming the first Vulcan B.Mk2 to enter service with the RAF. The crest was painted on her tail shortly after arrival.

PVC is a soft and adaptable material that can be moulded into any shape and colour allowing amazing detail and precision. It is flexible and lightweight, yet very durable.