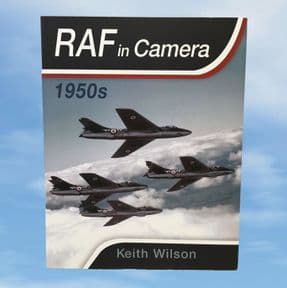 For aviation, the 1950s was a fascinating decade. For the Royal Air Force, it witnessed the transition from propeller to jet aircraft in the fields of fighter, bomber, trainer and transport aircraft. The 1950s saw the end of the Second World War veterans - Lancasters, Spitfires, Mosquitoes and Sunderlands. They were replaced by the first generation of jet aircraft including the Vampire, Hunter, Javelin and, at the end of the decade, the English Electric P.1 - later named the Lightning.

This photographic record of the RAF during the period illustrates all the varied and wonderful array of equipment in use and also considers the important events of the decade including Korea, the Malayan Emergency, Kenya and the Suez Crisis.

The decade also saw the beginning of the Cold War, which in turn led to significant developments in military aviation. For the RAF this included the V-bomber force of Valiant, Victor and Vulcan. Another development was the nuclear weapon and this volume includes images and information from Operation Grapple; testing Britain’s first live thermonuclear weapon - 70 times more powerful than that dropped on Hiroshima in 1945 - which was dropped from Vickers Valiant XD818 at Christmas Island on 15 May 1957. Another Cold War item featured is the Thor Intermediate-range Ballistic Missile, three of which were located on their launches at twenty RAF Bomber Stations around the UK.

1953 saw the Coronation of HRH Queen Elizabeth II take place at Westminster Abbey on 2 June. Shortly afterwards, a Coronation Review of the Royal Air Force was organised at RAF Oldham, and many images of the never-to-be-repeated event are included in this volume; as are details of all the 640 aircraft involved in the spectacular flypast that followed the Royal inspection.

Each chapter in this volume focuses on a specific year, relaying all the fascinating events and highlights. Lavishly illustrated from the archives of the Air Historical Branch, this is a colourful and insightful history, told with narrative flair and a clear passion for the subject matter.

Author: Keith Wilson has been actively involved in aviation publishing for more than 35 years and is a prolific author. Keith is probably best known for his striking air-to-air images in Pilot magazine, during which time he has photographed almost 2,000 different aircraft; featuring a very broad range of subjects, from gliders, microlight, vintage and veteran, aerobatic and general aviation subjects right through to high altitude research aircraft, business jets, commercial jets and military fast jets.