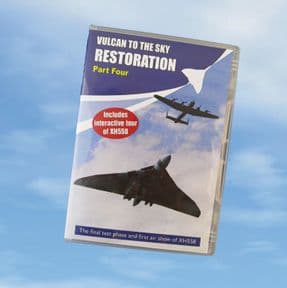 The fourth and final DVD follows the last push to get XH558 permanently back into the skies and features exclusive behind-the-scenes action as the team achieve their dream.
The highs and lows of the final phase of flight tests are captured and the last few problems overcome. The build-up to the aircraft’s first momentous appearance at a major airshow is seen and the story culminates with XH558’s full air show display followed by a stunning formation flypast with one of only two flying Lancaster bombers in the world, PA474 - Thumper.
Also includes a bonus interactive tour of Vulcan XH558.
Running time 1 hr 58 mins
Click on the Related Products tab above to see other individual DVD's in this collection and the Full Collection for just £30, Saving £18 on individual prices.