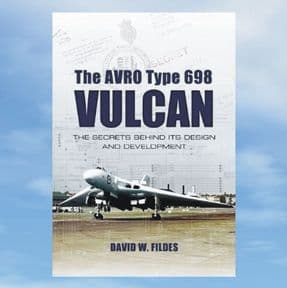 The AVRO Type 698 - VULCAN - Hardback
The secrets behind its design and development
Author: David W. Fildes

The Avro Vulcan was the last V Bomber to see active service in its primary role during the Falklands conflict. It is the most popular of the three and one aircraft (XH558) become airborne again after a long period of rejuvenation. It was always been a major attraction at air shows throughout the world, attracting crowds who delighted in its unique delta-wing shape and amazing manoeuvrability.

The book examines the origins of the design, the prototypes and experimental aircraft and goes on to explain the modifications that were made to the last of the breed.

Historian David W Fildes is an award winning graphic designer and illustrator. After serving several years in the Advertising Industry he joined at Hawker Siddeley Aviation in 1972, working at both the Chadderton and Woodford factories previously known as A.V. Roe & Co Ltd. (Avro).
In 1995 he was tasked to set up a Heritage Centre at BAE Systems Woodford which is going from strength to strength. Now known as the Avro Heritage Museum it records the many achievements of A.V. Roe & Co Ltd. and successor Company’s, giving David Fildes access to many previously unpublished photographs and experimental design plans.

He is a keen enthusiast of Avro and the iconic Vulcan which he continues to research.