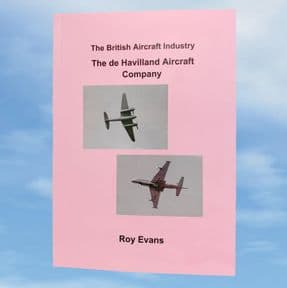 A series of books that cover the British Aircraft Industry in the Twentieth Century. From young men interested in ballooning or making model aircraft, they developed aircraft for wartime and passenger transport.

Geoffrey de Havilland was one of the first men to hold a pilot licence in England. During the Great War, de Havilland worked with George Thomas at Airco at Hendon, as his Chef Designer. Following the success of the DH4 and DH9 aircraft, Geoffrey de Havilland in the early 1920's formed the de Havilland Aviation Company. Following further successes in light aircraft design, with the Tiger Moth and the Comet Racer, it was decided to build a fast wooden bomber for the RAF. The Mosquito proved to be so adaptable, it was used for many purposes.

After the Second World War, the design team at Hatfield designed a range of 'Feeder' airliners, along with some fast jet fighters for the Royal Air Force and Royal Navy. Alongside this work development was proceeding on the Trans-Atlantic jet airliner, the Comet, and later the Trident.

As a member of the Royal Air Force Historical Society for several years he regularly attends their meetings. He is the Retford U3A Group Leader for their Military History Group and is a regular speaker at their monthly meetings.

He has also written a number of books and has had a number of works published in specialist aviation magazines. He is a regular contributor to the Lincolnshire Lancaster Association's journal 'Memorial Flight'.