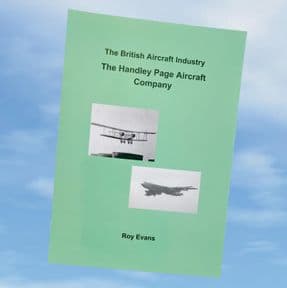 A series of books that cover the British Aircraft Industry in the Twentieth Century. From young men interested in ballooning or making model aircraft, they developed aircraft for wartime and passenger transport.

Like his early colleagues in the aviation industry, Frederick Handley Page was one of the first men to hold a pilot's licence in England. During the Great War, influenced by the German Zeppelin bombing raids, Handley Page designed a heavy bomber for the Royal Naval Air Service. He went on to design heavy bombers throughout the 1930's for the Royal Air Force, finally culminating in both the wartime Halifax and the post war 'V' Bomber the Victor.

Handley Page also produced aircraft for civil aviation, with the Dart Herald of the 1950's and the Jet Stream of the 1960's and beyond.

The company finished trading in the early 1970's but  their name lives on in the field of aviation.

As a member of the Royal Air Force Historical Society for several years he regularly attends their meetings. He is the Retford U3A Group Leader for their Military History Group and is a regular speaker at their monthly meetings.

He has also written a number of books and has had a number of works published in specialist aviation magazines. He is a regular contributor to the Lincolnshire Lancaster Association's journal 'Memorial Flight'.