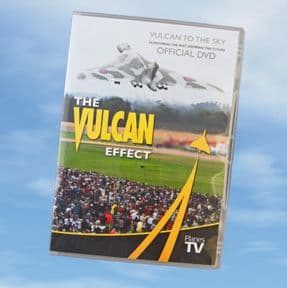 Something quite extraordinary happened to the UK airshow circuit in 2009; jammed telephone lines, inundated websites, capacity crowds, eyes skyward straining for a first glimpse of...., lumps in the throat, tears of joy, stunned silences as the subject of all this thunders onto the scene and four Bristol Siddeley Olympus engines developing 60,000 lbs of thrust tear the sky apart - AVRO VULCAN XH558 was flying again!

A fantastic review of the 2009 Display Season, with over 20 locations featured.

Exclusive access gets you behind the scenes with the crew, engineers and volunteers.

Includes onboard footage of the season finale at Southport.

Narrated by Broadcaster Seán Maffett’, a former RAF Squadron leader and the voice of Vulcan XH558, as our official commentator. Seán was also senior commentator at the RAF Fairford’s Royal International Air Tattoo (RIAT) for 28 years.