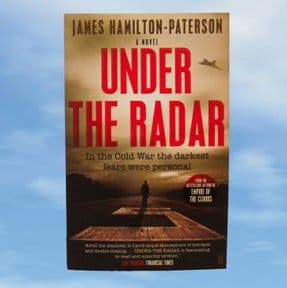 Under the Radar: A Novel

Under the Radar: A Novel
In the Cold War the darkest fears were personal
Author: James Hamilton-Paterson

From the best selling author of Empire of the Clouds

The Cold War, 1964: A squadron of Vulcan aircraft, Britain's most lethal nuclear bomber, flies towards the east coast of the United States. Highly manoeuvrable, the great delta-winged machines are also equipped with state of the art electronic warfare devices that jam American radar systems. Evading the fighters scrambled to intercept them, the British aircraft target Washington and New York, reducing them to smoking ruins. They would have done, at least, if this were not an exercise.

This extraordinary raid (which actually took place) opens James Hamilton-Paterson's remarkable novel about the lives of British pilots at the height of the Cold War, when aircrew had to be on call 24 hours a day to fly their nuclear-armed V-bombers to the Western USSR and devastate the lives of millions.

This is the story of Squadron-Leader Amos McKenna, a Vulcan pilot who is suffering from desires and frustrations that are tearing his marriage apart and making him question his ultimate loyalties. Relations with the American cousins are tense; the future of the RAF bomber fleet is in doubt, and is there is a spy at RAF Wearsby, selling secrets to the Russians?

In a gripping novel of Cold War pilot sand espionage, James Hamilton-Paterson conveys the desires and frustrations, the beauty and the danger of flying lethal aircraft under the shadow of destruction.

"Hamilton-Paterson has written an intelligent, stylish story about a war fast fading from our collective memory." - Antonia Senior, The Times

"This book is a must for RAF buffs and conspiracy theorists. But more importantly it is a testament to the unsung heroes of the skies who stood between us and a nuclear strike." - Daily Mail

"An absorbing fictionalisation of a fascinating few years ... Hamilton-Paterson has done is a terrific job recreating a credible atmosphere of the air force base, with its tensions between the old guard and the new, between the past and the future, ratchet and release, between men and women." - Toby Clements, Daily Telegraph

"In Empire of the Clouds, Hamilton-Paterson conjured up a magisterial account of the vanished glories of British jet aviation. While this novel is not a sequel, it focuses on a small part of that story with remarkable clarity and pathos ... As a riveting recreation of a period, it is a moving elegy with graceful prose and acute characterisation." - The Lady

Author: James Hamilton-Paterson is the author of the bestselling Empire of the Clouds, which was hailed as a classic account of the golden age of British aviation. He won a Whitbread Prize for his first novel, Gerontius, and among his many other celebrated books are Seven-Tenths, one of the finest books written in recent times about the oceans, the satirical trilogy that began with Cooking with Fernet Branca, and the autobiographical Playing With Water. Born and educated in England, he has lived in the Philippines and Italy and now makes his home in Austria.

The Golden Era of Britain's Aircraft
£9.99