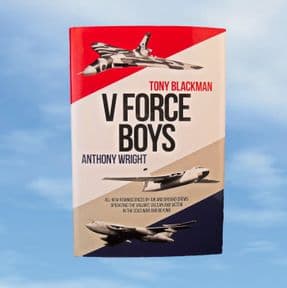 All new reminiscences by Air and Ground Crews operating the Valiant, Vulcan and Victor in the Cold War and beyond
Product Code: BKS072
Brand: XH558
£20.00
9

V Force Boys
All new reminiscences by Air and Ground Crews operating the Valiant, Vulcan and Victor in the Cold War and beyond
Authors: Tony Blackman and Anthony Wright

The V Force consisted of three four-jet bombers, the Valiant, the Vulcan and the Victor, all required as part of the nuclear deterrent in the Cold War following the end of the Second World War. The Valiant was less aerodynamically advanced than the other two and went into service in 1955. The Vulcan entered service in 1956 and the Victor a year later. The Valiant finished operating in 1965 and the Vulcan in 1984. The later Victors were converted into refuelling tankers and carried on until 1993.

V Force Boys contains a fascinating collection of previously unpublished stories by V Force ground and aircrew for all three V bombers plus descriptions of how all the aircraft navigated before the days of GPS and the training the crews received. Among other highlights, the book includes a first-hand account of dropping the last UK H-Bomb and an armourer's account of how the nuclear weapons were moved with complete safety but not in the regimented way that might be expected. In addition there are chapters which tell of incidents that would not be found in the RAF historical annals but show how the vigilant guarding of the UK had its lighter moments. A must for all Vulcan, Victor and Valiant enthusiasts.​​​