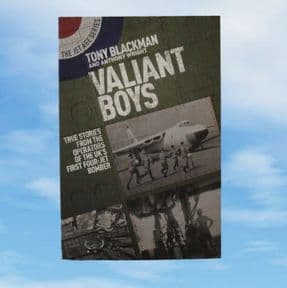 Valiant Boys is a fascinating collection of personal accounts of operating Britain’s first V-bomber by aircrew and ground crew. The book tells the story from the aircraft’s birth taking off from Vickers’ tiny airfield at Wisley to its premature death from fatigue. There are tales of testing atom bombs in the Australian desert, dropping hydrogen bombs in the middle of the Pacific and, as a complete contrast, attacking airfields with conventional bombs in Egypt during the very brief and abortive Suez campaign.

We are reminded of how the Valiant provided the UK’s first nuclear deterrent by always having some armed aircraft on stand-by twenty-four hours a day, supported by their air and ground crews, ready to be flown at a moment’s notice on a one-way trip to launch an atomic war. Not as well known as the Vulcan and Victor, the Valiant is often overlooked; this book will go a long way to redress the balance.

‘This is a splendid book, which supports the Valiant’s groundbreaking place in aviation history.’ - Airfix Model World

‘This is an excellent book, into which one can dip at random and always find something of interest.’ - Aeroplane

‘A good little book that fills a previously lamentable gap.’ - Britain at War

All new reminiscences by Air and Ground Crews operating the Valiant, Vulcan and Victor in the Cold War and beyond
£15.00
£20.00