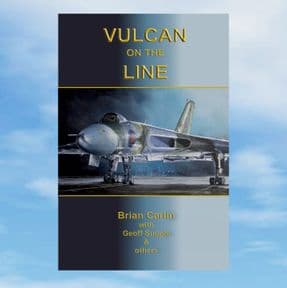 Vulcan On The Line - Paperback

Vulcan On The Line
Author: Brian Carlin with Geoff Supple & others

The Cold War! Britain’s V-Bombers poised to respond to any first strike by the USSR! The most nerve-wracking time – the Cuban Missile Crisis when all available V-Bombers were armed up with nuclear weapons, and maintained at 5 minutes readiness to scramble, despite the British Prime Minister’s denial that Britain had any involvement.

We learn of a hush-hush visit to a British V-Bomber base by a sitting U.S. President, an unwilling stowaway facing the prospect of a potentially fatal flight in a Vulcan, while another perfectly willing stowaway ends up hundreds of miles from his home. Russian KGB espionage and subversion are also revealed. The author and some of his colleagues from that long ago era tell their stories that range from the frigid iciness of Goose Bay in northern Canada to the sun-drenched island of Malta, but mostly take place on our own British V-bomber bases. Learn about some of the behind-the-scenes activities that it took to service and maintain a Vulcan bomber and some facts versus fiction concerning the Vulcan’s brief role in the James Bond film, Thunderball. Share the low point and heart-wrenching grief when an entire aircrew is lost in a tragic accident, contrasted with the high jinks during an overseas detachment. All this and much, much more.

This book is a must read for V-Bomber veterans or anyone with an interest in the magnificent Avro Vulcan.