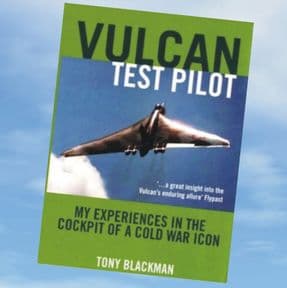 Vulcan Test Pilot
My experiences in the cockpit of a Cold War icon
Author: Tony Blackman​​​​​​​

Foreword by HRH The Duke of Edinburgh

Tony Blackman flew no less than 105 of the 136 Vulcans built, logging 850 flights at over 1,327 hours. His book describes in layman's terms what it was like to tame the first prototypes and to master the unusual characteristics associated with the Vulcan's shape. His words, descriptions and hitherto largely unpublished photographs will make people feel as he did the excitement of handling such an incredibly powerful monster which could and did bite back.

My extraordinary life in flight
From: £12.99