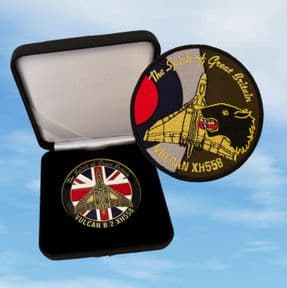 This coin and patch set celebrates one of the RAF's longest serving aircraft and the star of British airshows for many years, with the RAF and in later years with the Vulcan to the Sky Trust, Vulcan XH558.

XH558, possibly the most famous of the iconic Vulcan aircraft, flew in operational service between 1960 and 1984. After which she was selected for display duties with the RAF's Vulcan Display Flight (VDF), making her display debut at the TVS Airshow in Bournemouth in May 1985. The display Vulcan was the representative of all Vulcan squadrons and it was painted with the insignia of No.1 Group (a black panther’s head).

After her restoration and return to flight in 2007, XH558 flew her second display career continuing to sport the panther's head. The panther’s head remains in place on XH558 today, along with ‘The Spirit of Great Britain’  text - a description that was applied to XH558 on her 50th anniversary in 2010.

The coin measures 50mm in diameter and comes in a fitted black presentation box.