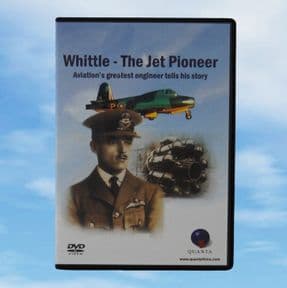 Sir Frank Whittle (1907-1996) was the greatest aero-engineer of the twentieth century. His invention of the jet engine didn't just change the face of the Earth, it enabled millions of us to see what it actually looked like.

Whittle's story is inspirational and yet so sad. Born to working class parents in Coventry, he joined the Royal Air Force, making himself taller via Maxalding exercises so that he met its height requirement. A genius for mathematics helped him make the rare transition from apprentice to cadet.

At RAF Cranwell Whittle quickly showed he was both an outstanding pilot and a visionary. For his course there he wrote Future Developments In Aircraft Design, predicting flight at 500 mph. He began to seek a new kind of aviation power plant.

He saw that a gas turbine and compressor 'with a combustor in between' could produce the thrust to propel a plane at high speeds. And so the turbojet was born. It was 1929.

But industry and officialdom rejected the idea. Whittle, undeterred, filed a patent. Not until 1936 was a company set up (named Power Jets) to build a prototype jet engine. And only in mid-1939 did Whitehall back the project, ordering a flight engine and airframe, the Gloster E28/39. It first flew on May 15th 1941.

In war, Power Jets focussed on jets for a new RAF combat plane - the Gloster Meteor - but Rover, contracted to build its engines, wasted two years. Had Whittle been backed earlier, the UK could have fought the Battle of Britain with combat jets.

War made Whittle a public hero but gave rivals his invention for free. As a serving officer, he was no match for powerful industrialists with different motives. When Power Jets was nationalised in 1944, they soon stopped it building engines in competition, just as Whittle was building the first supersonic and by-pass jets. He quit Power Jets in 1946.

Whittle's long struggle had damaged his health, which led to his leaving his beloved RAF in 1948. Knighted that year, he would never again build jet engines.

View a 2 minute clip of the DVD on Vimeo - Sir Frank describes the content of his thesis, written in 1928, on 'future developments in aircraft design'. He concentrated on the engine and flying at high altitudes and speeds over 500mph. He described what is today referred to as a motorjet - a rudimentary type of jet engine.

Eric Brown – A Pilot’s Story - DVD is also available in our online store.

Britain's greatest aviator in his own words
£18.00